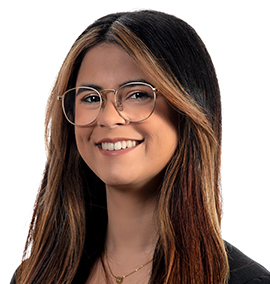 Raised on the island of Puerto Rico, Christy received her BA at the University of Tampa in 2016, where she continued as a Principal in a K-12 Day school. She graduated Magna Cum Laude from Nova Southeastern University Shepard Broad College of Law. She held countless organizational positions, such as President of the Immigration Law Organization, Hispanic Students Bar Association, and ToastMasters. She was also the Bilingual Editor of the International Law Students Association Journal and competed internationally and domestically with Nova’s Moot Court and Trial Teams. Christy has interned with the Congressional Hispanic Caucus Institute, the 11th Judicial Circuit of Miami-Dade County, and the U.S. Coast Guards District Seven’s JAG Corp. office. During her legal studies, Christy also dedicated some time at the University of Barcelona, Spain studying international law. Christy is an associate attorney at Pearson, Doyle, Mohre & Pastis LLP, where she practices in Insurance Defense and Insurance Coverage Litigation.